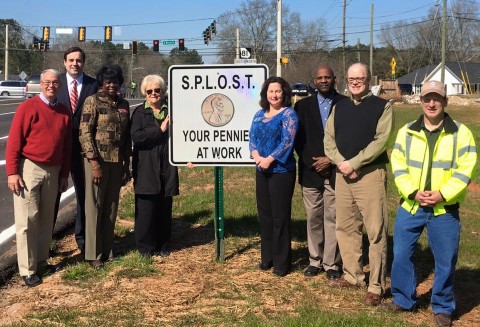 The 6th week of Legislative Session 2016 begins on Tuesday, February 16th this week. We are officially halfway through the legislative session and I could not be more proud to be representing Senate District 43 in the State Senate.

Last Monday the Senate passed Senate Bill 278, which increases the criminal penalties for pimping and pandering, and requires those convicted of a second offense to register with the National Sex Offense Registry. This legislation is particularly important to me, as it helps to minimize the effects of sex trafficking in our state and gives prosecutors more leeway in keeping criminals off our street. If you are interested in hearing more on this issue, click here to watch a video of my analysis on SB 278.

Tuesday also marked an important day for me as we celebrated Women’s Caucus Day at the Capital. Formed in 1990, this bicameral and bipartisan caucus brings female legislators of the General Assembly together to work on issues important to Georgia women and their families. While the caucus meets weekly to discuss issues directly impacting Georgia’s women, Women’s Caucus Day allows female legislators to come together and recognize our accomplishments.

This week, I also welcomed quite a few members of the Rockdale, Newton and Conyers communities. On February 9, I celebrated Realtor Day with the East Metro Board of Realtors President Dr. Cynthia M. Davis as well as board members of both Rockdale and Newton Counties. It was an exciting day as we discussed the impact realtors have on our community in connecting families and individuals with safe and affordable housing. Trade associations such as these are integral to our economy as they promote a skilled and connected work force.

On Saturday we marked the opening of a new intersection in Porterdale at the Burger King. This project, which was funded by SPLOST, was almost $2 million and significantly improves the safety of this very busy area. Mayor Arline Chapman, Representative Dickerson, Chairman Keith Ellis and Commissioner JC Henderson joined me at the event.

Even as the session gets busier, please let me know if I can be of service in any way. With only 20 legislative days remaining, there will be more and more legislation to read, vet and vote on. I want to thank you all personally for everything you do in our community and for entrusting me to work on behalf of Georgia’s 43rd Senate District.
Senator JaNice Van Ness represents the 43rd Senate District, which includes portions of DeKalb, Newton and Rockdale counties. She may be reached at 404.463.2598 or by email at janice.vanness@senate.ga.gov.

Make sure that your voice is heard. Be sure you are registered to vote and then vote in early voting or on election day. Use the link below to register or verify your registration status.
Georgia My Voter Page

There are no upcoming events.